We are so excited to have you back in the library for the 2021-2022 school year! Use this site to find resources and library updates. We have a new librarian this year- Ms. Gunderson! Come find her in the library and say hi!

Contact Ms. Gunderson if you have questions about library books, textbooks, technology, or Laptop Rollout.

Are you looking for Summer Reading Recommendations?  If so, explore the following:

Your student ID gives you access to even more amazing resources from the King County Library System!

LWSD eBooks are now available for check out via Sora from Overdrive! Use this link for directions on how to access the very latest and best books available to LWSD secondary students. 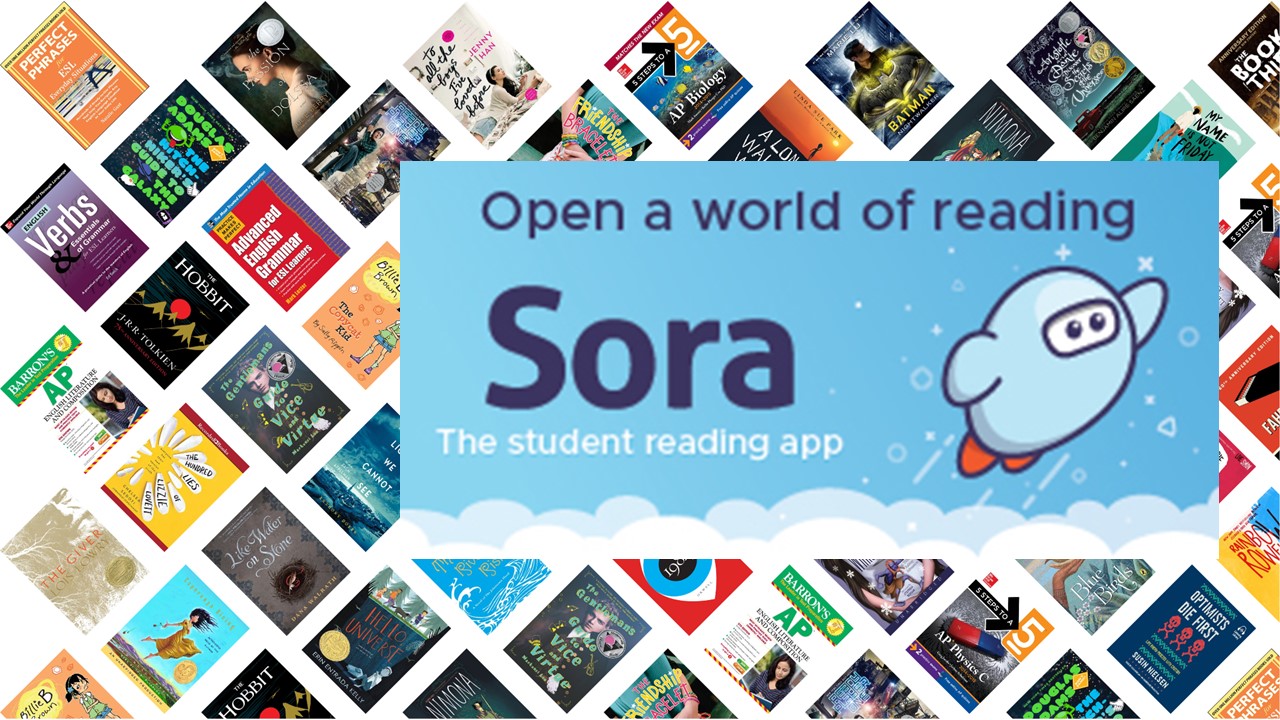 You can download the Sora app to read on your mobile device or kindle! You can even get a head start on all Battle of the Books titles! Email Ms. Gunderson if you need help.

Click here for the LWSD Database Links. From home, students will need usernames and passwords to access these databases. These passwords are listed in the Research and Resources channel under files on the Library Teams site, as well as instructions for accessing KCLS Databases.  Parents may contact Ms. Gunderson for PDF copies of LWSD and KCLS Databases access information.

Please email Ms. Gunderson, Mrs. MacRae, or Mrs. Wishart if you are having issues with your laptop. Depending on the problem, we may be able to troubleshoot for a fix quickly or submit a HelpDesk ticket for you.

Need immediate assistance? Contact the Family Technology Access Support Team. They are available from 7:00am to 7:00pm, seven days a week.
(425) 936-1322 or ftaccess@lwsd.org.

For more information and tech FAQ's please visit the LWSD Technology Help Page  and more detailed information is in the Laptop Handbook PDF download. Once In-person School resumes, students may stop by the library for drop-in laptop help (with teacher permission if during class).

We encourage students to register your password in the event you have difficulty logging in to your student account. The process is simple and quick! We can help you reset your password in the library, but doing this process ahead of time will mean you're never locked out!
Locked out? Here's the link to access Password Recovery.

The district is working with Worth Ave Group to offer students optional insurance for laptops. More information about insurance can be found on the Worth insurance portal. Laptop repairs can be expensive, please review the laptop handbook for more information.

A parent or guardian may opt out from checking out a district laptop if they have a preferred device already available for the student’s schoolwork that better meets personal circumstances. Please note that LWSD student laptops may at times offer additional resources or closer alignment of software experiences between teacher and student.

Students in Grades 6, and new RHMS students: Please download and sign the appropriate copy of the Student/Parent Laptop Agreement Form and drop it off at the school or email to Ms. Gunderson or Mrs. MacRae. Forms can be found on the LWSD Technology Page.

Need help finding just the right book? Here are some links to get you started. Please note that not all books on these lists are right for every student. Check the age level recommendations to make sure a book is right for you.

What Should I Read Next Bookfinder

Battle of the Books is a cooperative effort between Evergreen, Finn Hill, Inglewood, International Community School, Kamiakin, Kirkland, Redmond, Rose Hill, and Timberline Middle Schools. This program allows 6th, 7th, and 8th graders in each school to work together as a team and challenge other schools to correctly answer questions about the selected books. The goal is to encourage students at all reading levels to engage in teamwork while reading some of the best in children’s literature. Challenge questions are based on specific and factual information within the books.

The Mystery of Black Hollow Lane by Julia Nobel (Mystery): With a dad who disappeared years ago and a mother who's a bit too busy to parent, Emmy is shipped off to Wellsworth, a prestigious boarding school in England, where she's sure she won't fit in.  But then she finds a box of mysterious medallions in the attic of her home with a note reading: These belonged to your father. When she arrives at school, she finds the strange symbols from the medallions etched into walls and books, which leads Emmy and her new friends, Jack and Lola, to Wellsworth's secret society: The Order of Black Hollow Lane.

Unplugged by Gordon Korman (Humor): As the son of the world’s most famous tech billionaire, spoiled Jett Baranov has always gotten what he wanted. So when his father’s private jet drops him in the middle of the Arkansas wilderness, at a place called the Oasis, Jett can’t believe it. He’s forced to hand over his cell phone, eat grainy veggie patties, and participate in wholesome activities with the other kids, who he has absolutely no interest in hanging out with.  As the weeks go on, Jett starts to get used to the unplugged life and even bonds with the other kids over their discovery of a baby- lizard-turned-pet, Needles. But he can’t help noticing that the adults at the Oasis are acting really strange.

Measuring Up by Lily LaMotte (Graphic Novel): Twelve-year-old Cici has just moved from Taiwan to Seattle, and the only thing she wants more than to fit in at her new school is to celebrate her grandmother, A-má’s, seventieth birthday together.  Since she can’t go to A-má, Cici cooks up a plan to bring A-má to her by winning the grand prize in a kids’ cooking contest to pay for A- má’s plane ticket! There’s just one problem: Cici only knows how to cook Taiwanese food.

Secret Soldiers by Keely Hutton (Historical Fiction): Secret Soldiers follows the journey of Thomas, a thirteen-year-old coal miner, who lies about his age to join the Claykickers, a specialized crew of soldiers known as “tunnelers,” in hopes of finding his missing older brother. Thomas works in the tunnels of the Western Front alongside three other soldier boys whose constant bickering and inexperience in mining may prove more lethal than the enemy digging toward them. But as they burrow deeper beneath the battlefield, the boys discover the men they hope to become and forge a bond of brotherhood.

I Love You So Mochi by Sarah Kuhn (Romance): Kimi Nakamura loves a good fashion statement. She's obsessed with transforming everyday ephemera into Kimi Originals: bold outfits that make her and her friends feel like the Ultimate versions of themselves. But her mother disapproves, and when they get into an explosive fight, Kimi's entire future seems on the verge of falling apart. So when a surprise letter comes in the mail from Kimi's estranged grandparents, inviting her to Kyoto for spring break, she seizes the opportunity to get away from the disaster of her life.  When she arrives in Japan, she's met with a culture both familiar and completely foreign to her.

Charlie Thorne and the Last Equation by Stuart Gibbs (Suspense): Decades ago, Albert Einstein devised an equation that could benefit all life on earth—or destroy it. Fearing what would happen if the equation fell into the wrong hands, he hid it.  But now, a diabolical group known as the Furies are closing in on its location. In desperation, a team of CIA agents drags Charlie into the hunt, needing her brilliance to find it first—even though this means placing her life in grave danger. In a breakneck adventure that spans the globe, Charlie must crack a complex code created by Einstein himself, struggle to survive in a world where no one can be trusted, and fight to keep the last equation safe once and for all.

The Eagle Huntress by Aisholpan Nurgaiv (Non-fiction): In this compelling memoir, teenaged eagle hunter Aisholpan Nurgaiv tells her own story for the first time, speaking directly with award-winning and New York Times bestselling author Liz Welch who traveled to Mongolia for this book. Nurgaiv's story and fresh, sincere voice are not only inspiring but truly magnificent: with the support of her father, she captured and trained her own golden eagle and won the Ölgii eagle festival. She was the only girl to compete in the festival.

Tristan Strong Punches a Hole in the Sky by Kwame Mbalia (Fantasy): Seventh grader Tristan Strong feels anything but strong ever since he failed to save his best friend when they were in a bus accident together. All he has left of Eddie is the journal his friend wrote stories in. Tristan is dreading the month he's going to spend on his grandparents' farm in Alabama, where he's being sent to heal from the tragedy.  But on his first night there, a sticky creature shows up in his bedroom and steals Eddie's notebook. Tristan chases after it and a tug-of- war ensues between them underneath a Bottle Tree. In a last attempt to wrestle the journal out of the creature's hands, Tristan punches the tree, accidentally ripping open a chasm into the MidPass, a volatile place with a burning sea, haunted bone ships, and iron monsters that are hunting the inhabitants of this world.

Scary Stories for Young Foxes by Christian McKay Heidicker (Horror): The haunted season has arrived in the Antler Wood. No fox kit is safe.  When Mia and Uly are separated from their litters, they discover a dangerous world full of monsters. In order to find a den to call home, they must venture through field and forest, facing unspeakable things that dwell in the darkness: a zombie who hungers for their flesh, a witch who tries to steal their skins, a ghost who hunts them through the snow . . . and other things too scary to mention.

Fireborne by Rosario Munda (Fantasy): Annie and Lee were just children when a brutal revolution changed their world, giving everyone--even the lowborn--a chance to test into the governing class of dragonriders.  Now they are both rising stars in the new regime, despite backgrounds that couldn't be more different. Annie's lowborn family was executed by dragonfire, while Lee's aristocratic family was murdered by revolutionaries. Growing up in the same orphanage forged their friendship, and seven years of training have made them rivals for the top position in the dragonriding fleet.

A Good Kind of Trouble by Lisa Moore Ramee (Realistic): Twelve-year-old Shayla is allergic to trouble. All she wants to do is to follow the rules. (Oh, and she’d also like to make it through seventh grade with her best friendships intact, learn to run track, and have a cute boy see past her giant forehead.)  But in junior high, it’s like all the rules have changed. Now she’s suddenly questioning who her best friends are and some people at school are saying she’s not black enough. Wait, what?

Do you use Common Sense Media?  CSM has always been a great resource to provide age-based media reviews for families for books, movies, apps & technology, and more.  They now have added some thoughtful coronavirus resources for parents as well.  Look for the link on the top-right of their main Parent Resource Page.

Please contact Ms. Gunderson if you have any questions or need further assistance.

KCLS has many resources for students!
Use this link to view a PDF of the resources they have to offer!

Please visit the Technology Support page for help with your school laptop.